My local dealer purchased a high end collection of coins from a gentleman who was either a relative of or had ties to the Adolph Weinman family.  One of the coins in the set was a stunning rainbow-toned 1943-S Mercury Dime.  In the flip with the coin was Adolph Weinman's name and address, along with handwritten details of the coin.  Though not a rare date, the coin is stunning to behold, quite possibly the finest rainbow Mercury I've ever held in my hand.  I'm not a dime collector, but the fact that the coin seems to have been owned by the designer of the coin greatly appealed to me.  So, I now own it.  I'm excited to add this piece of history to my collection!  Check out the pictures!  Update:  I contacted David Lange, the research director at NGC, to inquire as to the possibility that this could have been owned by Weinman.  His response was as follows:


John, I imagine that A. A. Weinman did acquire a small number of his dimes in 1916 to distribute to friends and clients, though I've seen no such written account. As your dime is dated 1943-S, it is not likely that Weinman made a presentation of it. As noted above, he would have done this when the coin type was new in 1916. It appears that some previous owner of your dime acquired one of Weinman's business cards and cropped it to its present size. The real value of this dime lies in its beauty, and there is no reason to believe that Weinman owned it himself.     Dave

So, it would seem likely that it is NOT a Weinman-owned dime, in spite of the story the gentleman told my dealer.  In any case, it is a gorgeous example in stunning condition with beautiful toning! 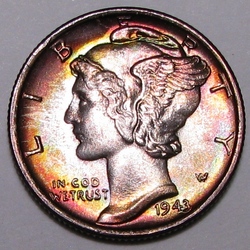 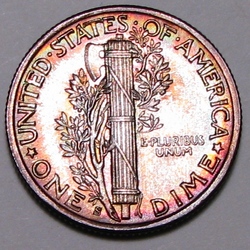 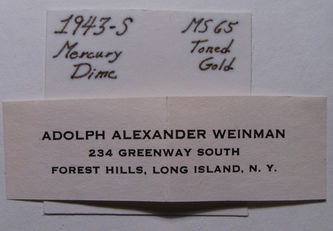